Home Stories & experiences The LF Maasroute: hop on your bike and follow the signs

The LF Maasroute: hop on your bike and follow the signs

On Thursday 25 April, Laura and Irene embark on riding the first iconic cycle route through the Netherlands, the LF Maasroute. What are their experiences? You can read it here. 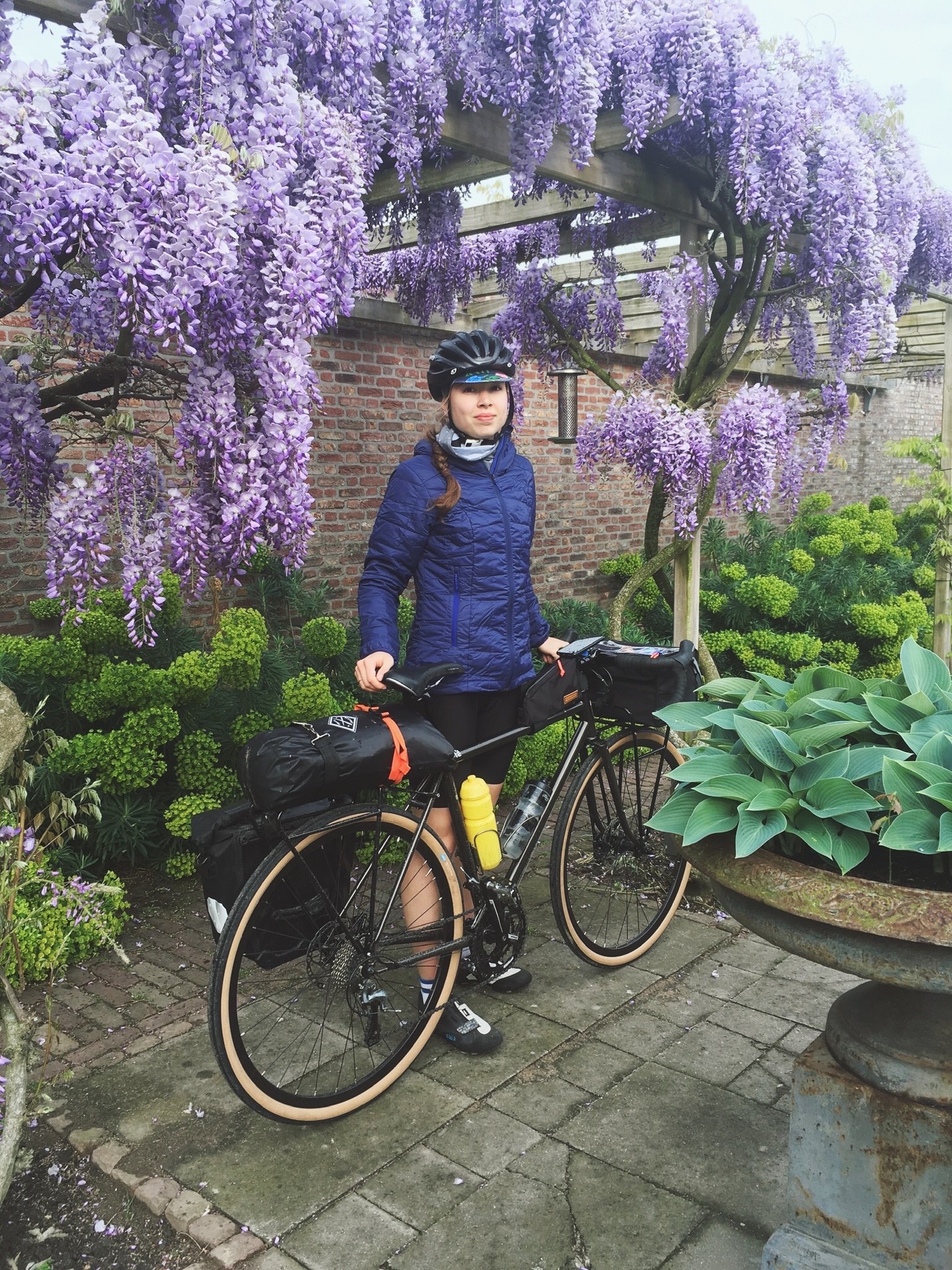 On Thursday 25 April, we embark on riding the first iconic cycle route through the Netherlands, the LF Maasroute. This long-distance cycle route starts where the Maas enters the Netherlands, just below Maastricht, and finishes in the largest city on the Maas, Rotterdam.

We begin the route where the provinces of South Holland, North Brabant and Gelderland meet: at the beautiful Loevestein Castle. And how do we get there? By bike, of course. From Rotterdam, it takes only 45 kilometres and one ferry-crossing to get to this location. That’s how close adventure can be.

We’ll cycle back to Rotterdam in three days. Read here about our experiences along the way and what we think of the route. 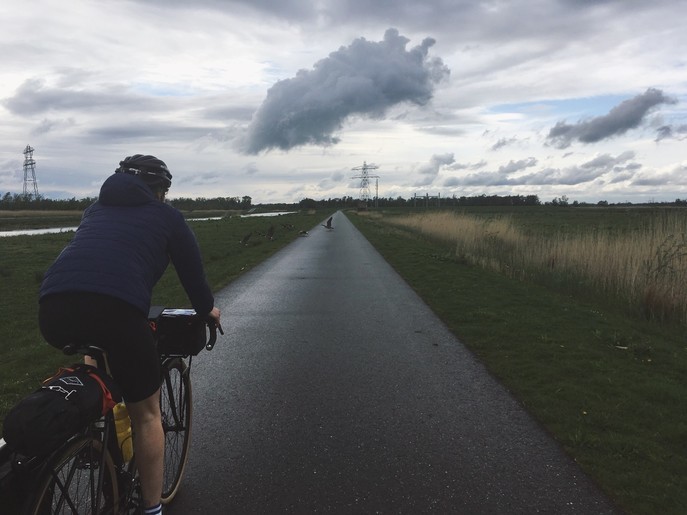 At Loevestein Castle we’re welcomed by the organisers of Nederland Fietsland. Today is a big day: the first LF icon route will be opened and we’re the very first to ride this new route.

After the ribbon has been cut, the necessary photos have been taken and the rain has started to fall, we get on our way. From Loevestein Castle we cycle past the fortified town of Woudrichem into the polders. Along the way we’re craving a cup of coffee, which we eventually find in Werkendam. 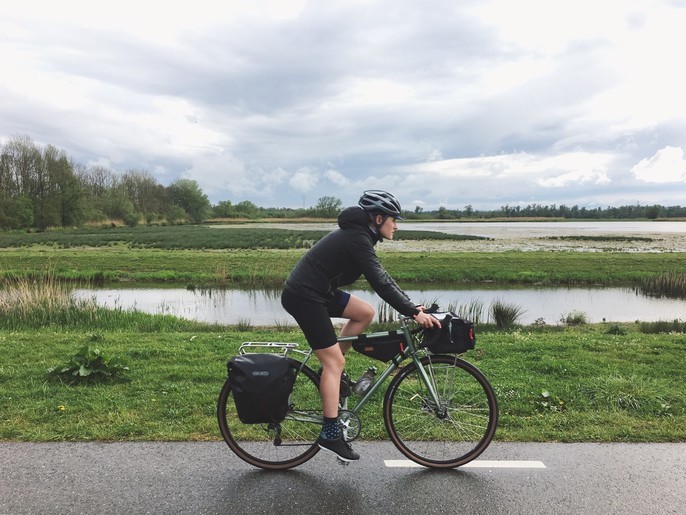 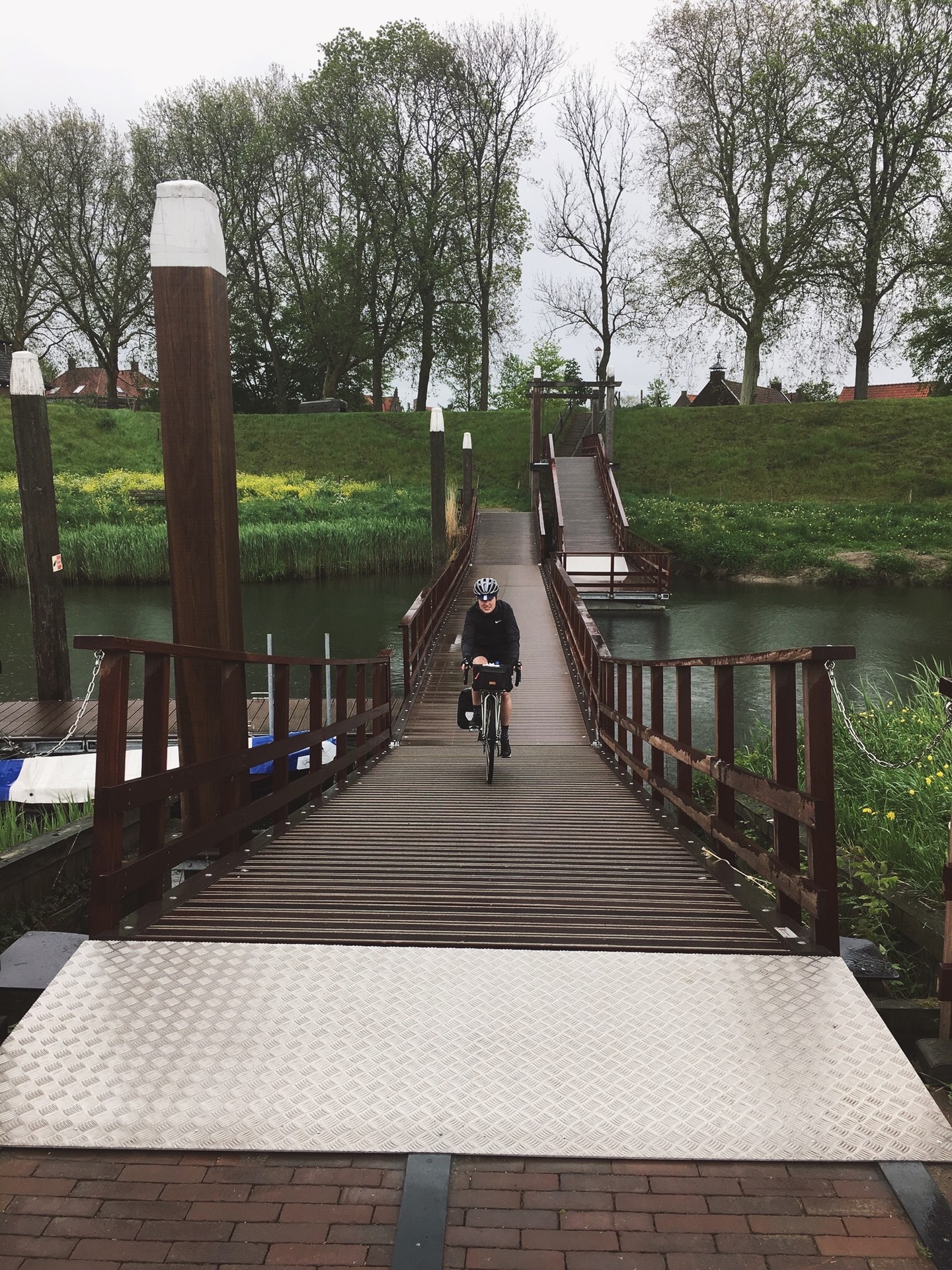 Once we’ve warmed up a bit and it appears to be dry outside, we continue our tour. Before we know it, we’ve entered the Biesbosch. It has been a long time since we were here and once again we’re looking around in awe. We see the spring in full bloom: everything is super green and the animals have young. These kilometres are the absolute highlight of the first stage: there’s nothing like a beautiful nature area in combination with the Dutch cloudy skies. When the sun breaks through, we almost feel like we’re in a foreign land for a while (you must admit: doesn’t it just look like northern France?!).

That is, until we arrive at the next ferry, which we use to cross to Kop van het Land. We actually had planned to camp in Dordrecht at the natural campsite De Kleine Rug, but we’re cold, soaking wet and hungry. Unfortunately, the campsite loses out against a good friend’s offer to inflate our air mattress at their home. After having consumed a whole lot of food, we go to bed. On to the second stage! 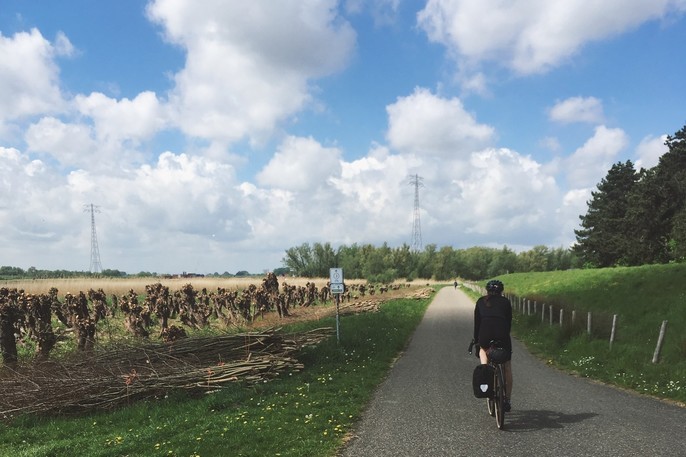 As soon as we wake up we notice something: the sun is shining! And what do you do when it’s sunny? You go to the coast. So we roll off our air mattress and get ready to go.

At 10 o’clock we ride through the historic centre of Dordrecht towards the Hoeksche Waard. The road along the Oude Maas is beautiful, quiet and green. And also yellow, thanks to the flowering rapeseed. In the Groot Koninkrijk nature reserve, where we’re welcomed by the sound of mooing cows, we meet a man on the first day of his retirement and inspire him to ride the Maasroute as well. That’s how it goes in the countryside. 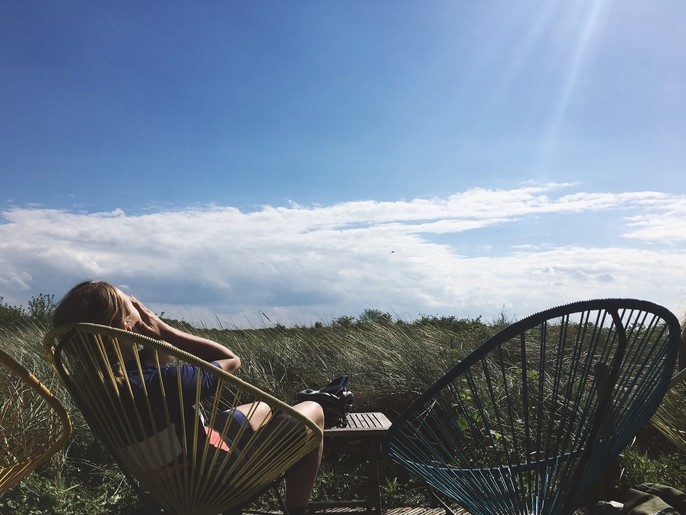 It’s time to cross the river, but as it turns out the ferry from Puttershoek to Zwijndrecht won’t operate until 11 May. So we’ll stay in the Hoeksche Waard for a bit longer, until the Heinenoord tunnel takes us to the other side. In the distance, the civilized world comes back into view.

After eating a whole wheat peanut butter sandwich, we can leave off our arm warmers too. It feels like summer. Then we enter the next fortified city: Brielle. Time for coffee and cake. It gives us enough energy to pedal away those last few kilometres. Off to Oostvoorne, where we enjoy a delicious spring beer at restaurant Aan Zee. In our holiday home we prepare for the final stage. 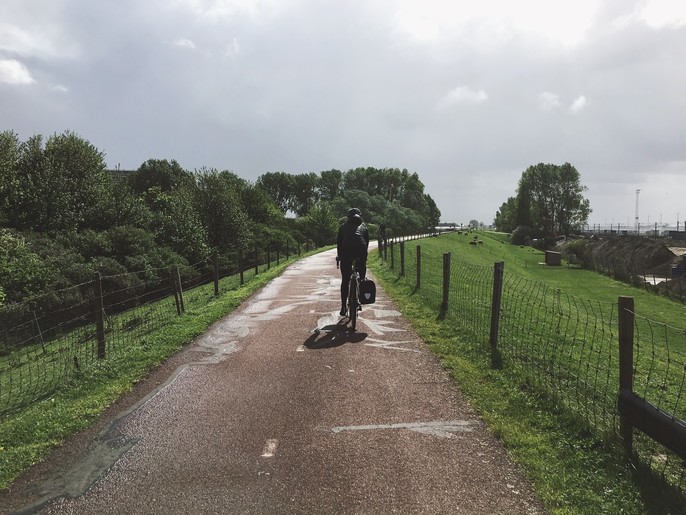 Rotterdam, here we come! The end of our LF bike adventure is nearing: today we’re cycling back home. We leave early in hopes of avoiding the worst of the rain, but we’ve hardly turned the first corner when we’re caught in the middle of a blistering hail shower. We’re not made of sugar, though (as grandma used to say), so we stubbornly keep on cycling.

Slowly but surely the landscape changes from calm and green to built-up and grey. At the Maasvlakte we become greatly fascinated by the stark contrast between raw industry and embedded nature areas full of screeching seagulls. In the meantime the wind is blowing to its heart’s content, making us fly across overpasses at 30 kilometres per hour without even having to pedal. 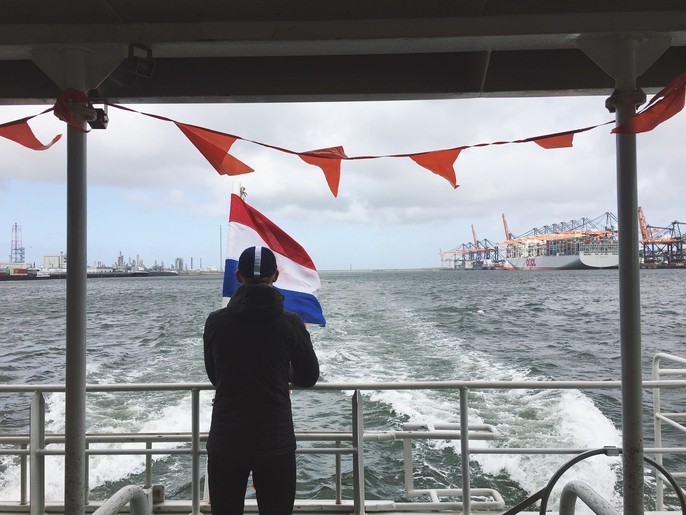 We ride past large cranes and stacks of colourful containers - for the rest, the place is virtually completely deserted (it’s almost a bit spooky). Fortunately there’s the lively sailors of RET Fast Ferry, who bring us back to the land of the living.

From Hoek van Holland we ride along the Nieuwe Waterweg, arriving in Rotterdam with the wind on our tails. We’re treated to one last rain shower before we reach the Erasmusbrug, but once we’re there a bit of sun finally shows itself as well. 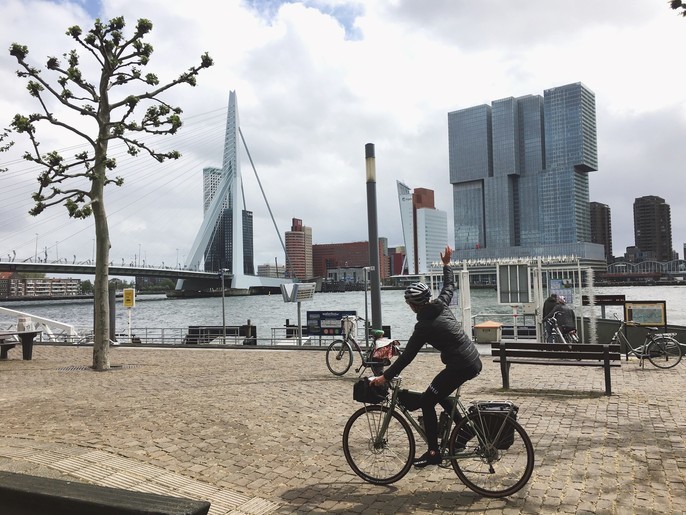 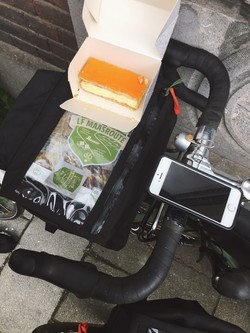 A few final words
Before we left we entered the gpx file of the route into our navigation system, but we’ve hardly needed to use it. The route is signposted well, so enjoy finding your way. Without a doubt, our favourite stage was the one from Loevestein Castle (or actually Aalst) to Dordrecht. That’s because it beautifully showcases the Netherlands: lots of nature, polders, dykes, fortresses, fortified towns, industry and one of the oldest cities of the Netherlands.

We hope that we’ve managed to inspire you to grab your bike as well and discover (a part of) the LF Maasroute. It’s really very simple: just hop on a bike, follow the signs and enjoy the sights.

About us
We’re Laura Maat (25) and Irene Maaskant (27). We live in Rotterdam and started our cycling adventures in 2014 with two rusty bikes that we bought online and a backpack full of inner tubes. Now, with many kilometres and experiences under our belt, we’ve come up with the plan to cycle through Europe for a few months as of June 2019. 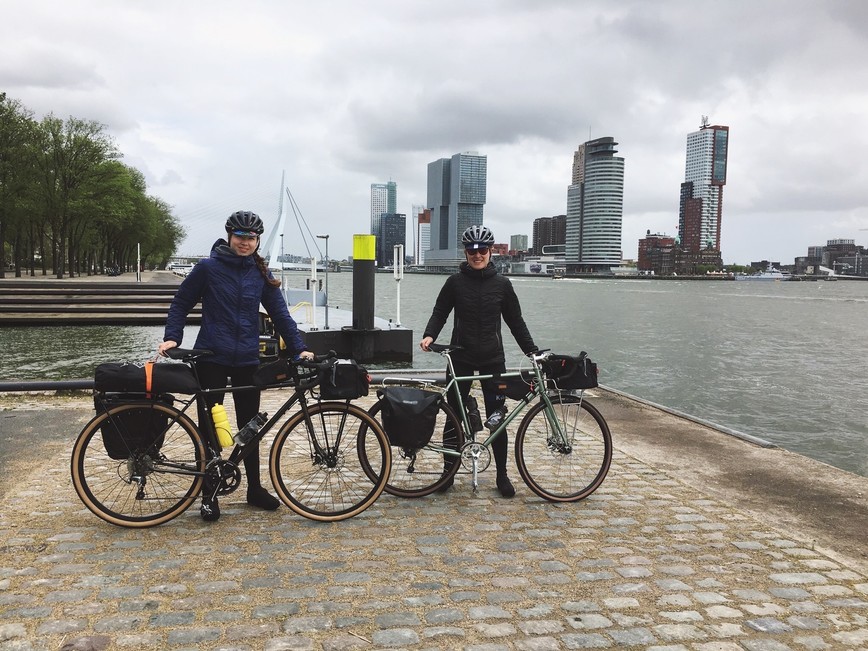