Home Stories & experiences To the source of the Maas

To the source of the Maas

Bike journalist Stefan Maas followed the Maas (or Meuse) to its source. An oil lamp joined him on his journey.

The new international Meuse Cycle Route offers around a thousand kilometres of cycling fun in three countries. Of course, bike journalist Stefan Maas couldn’t ignore the route. An oil lamp joined him on his journey.

Maas discovers the Maas. It sounds like a nice opening line for a story about a bike trip. However, it’s certainly not the first time that I’ve been cycling along my namesake. Years ago I rode my bike from the Vosges to Hilversum, after my holiday had been cut short unexpectedly. The easygoing Maas regularly crossed my path while the sun was shining exuberantly. Sometimes it was far away, invisible in a valley, and I had to guess where it was flowing.

But now, at the river’s mouth at Hoek van Holland, the setting is different. The sand is stinging my eyes. A strong southwest wind is blowing in from the North Sea and lashes out at cyclists on the path along the Nieuwe Waterweg. Everything here is oversized. Mega ships are making their way to mega ports. How different will it be at the river’s source in the French countryside, about a thousand kilometres away?

Fortunately, I quickly escape the port area. After Rotterdam - if you opt for the southern version of the route - it’s a wonderful ride along the Oude Maas on a smooth bike path through the greenery. Suddenly the big city is far away. And you rediscover just how many waterways, canals and rivers cut through the Netherlands, splitting up the country. The coming days I’ll be going back and forth using various ferries. They have a disadvantage, though, because after 6 pm you run the chance that the ferry is in for the night and that your day of bike riding will come to an abrupt end. 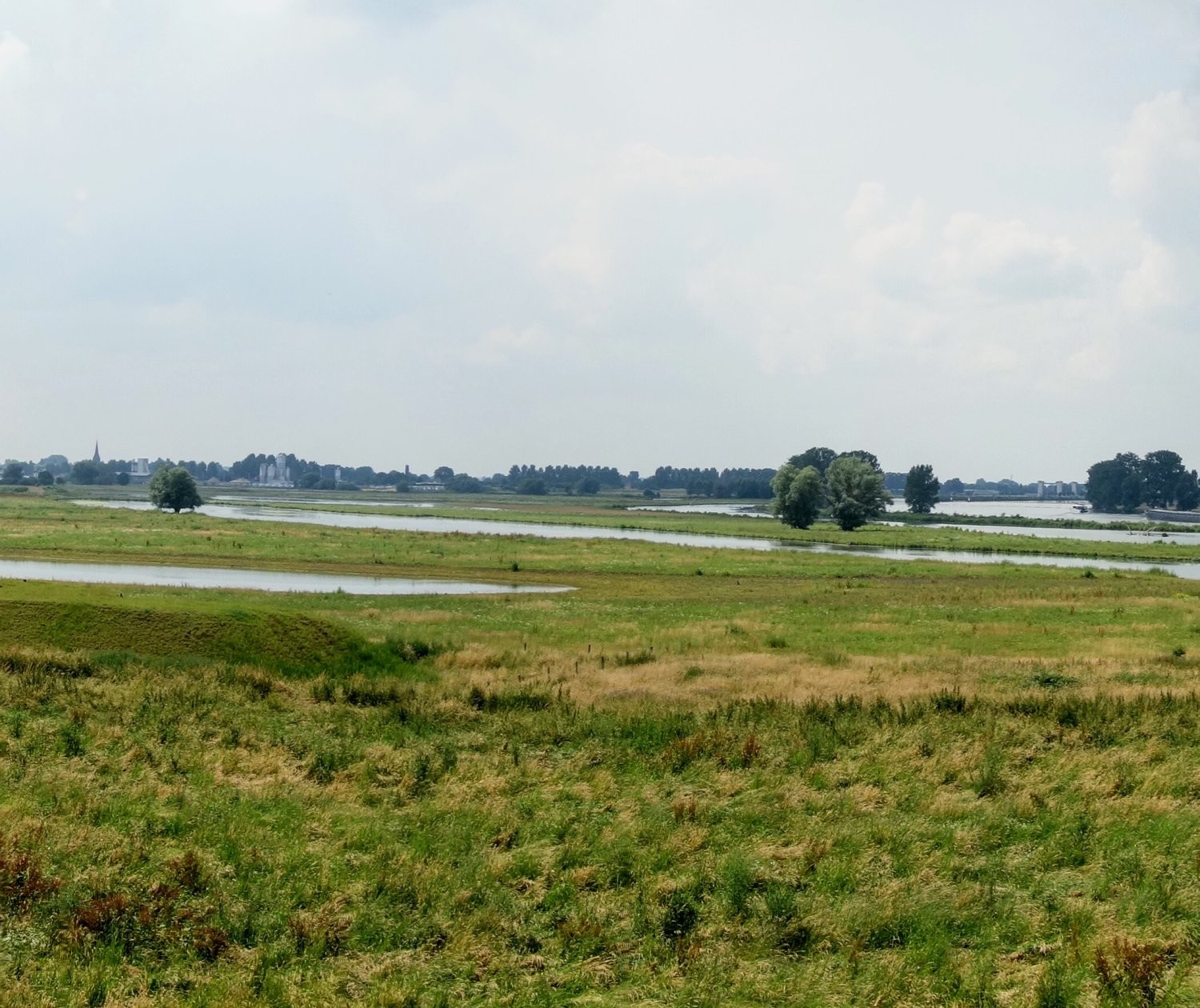 The long-distance cycle routes LF3 and LF12 lead me further along the Maas in the Netherlands. Direction signs are neatly placed in the right spots, a GPS is unnecessary. The river landscape is blessed with pleasant clichés. Floodplains, slowly passing ships, wide views. Chickens, pot-bellied pigs and rabbits linger around the winding dikes. Every dyke house resident seems to be a hobby farmer.

In supermarkets, the ‘Holland’ speech makes way for the North Brabant accent and then for the Limburg dialect. And the route keeps on meandering alongside that glittering ribbon. No wonder it’s more than a thousand kilometres long. In the Solt bivouac area near Opitter in Belgian Limburg, I wash away the sweat of a long day of cycling with pumped up groundwater. It’s a wonderful forest clearing, where the birds are singing until late in the evening. A cyclist enters the site in the midst of their concert: it’s Raymond. We’ll ride the remaining part of the route together. On his luggage rack he’s carrying an old oil lamp. Ultimately we decide to leave it at the source of the Maas, as a beacon for Maas cyclists.

Industrial zone
Liège marks a new chapter of the route. In the past, all car traffic travelling from north to south wriggled its way through the city centre along the river. Since the opening of the Tunnel de Cointe in the year 2000, this is no longer the case. Now it’s the cyclists who make their way along the Maas using a car-free path. It’s a fantastic way to traverse the centre. Regular bridges make it easy to cross over to the heart of town. When the mining and steel industry in Liège collapsed thirty years ago, the city took a big hit. Poverty and decline set in, the number of drug addicts increased. Fortunately, Liège found its way up again. Now there are less unemployed people and more trendy bars and restaurants. The old industry continues to dominate the environment, though. Big, half-ruined factories, dilapidated workers’ houses; they are relics from the industrial era. We also pass the cooling towers of the Tihange nuclear power plant. You can’t just erase those industrial landmarks: they’re part of this area’s DNA.

French Ardennes
Once we’re out of reach of the industrial zone, the more charming part of Wallonia shows itself. Of course we ride up to the citadel of Namur and admire the fortress of Dinant. Before we know it, we’re in the French Ardennes. This is undoubtedly the most beautiful part of the route; here, the Maas slithers like a snake past the hills. From Givet on the French border to Sedan, a beautiful 121-kilometre long bike path with the name Trans-Ardennes has been constructed. “This is heaven,” says a Scottish cyclist who we’re passing. With his girlfriend he makes daily bike trips in the area while on holiday. At home in Scotland, there are hardly any bike paths they can use. And the Scottish motorists treat cyclists awfully. Is this bike heaven indeed? Green hills, a bike path and the Maas which reflects the buildings when the weather is good. I can live with it. By the way, many Dutch ‘pensionados’ are exploring this part of France by boat. We see them at the mooring places in the villages; a Dutch army of retired people floats around in the Maas each summer.

Verdun
After the blessed Trans-Ardennes bike path, ‘nord’ and ‘sud’ signs show us the way on bigger through roads. Traffic suddenly increases near Verdun, known for the biggest battle in world history. Hundreds of thousands of soldiers were massacred here during World War I. A large monument in the city centre commemorates the victory of the French. The history of Verdun naturally also attracts a special category of cycling tourists. In the local super market we run into two Dutchmen. On old bikes they scour the former battlefields in search of shrapnel and abandoned equipment. That’s obviously something that’s easier to do on a bicycle than with a car.

De l’alcool
We ride deeper into France. One deserted village after another crosses our path. After having covered 130 km, we start looking for a bar to quench our thirst. But that’s not that simple. “De l'alcool?,” we ask in the umpteenth village where we actually happen to see someone in the street. The man shakes his head. Yes, seven kilometres down the road we should be able to find something. We don’t really want to ride another kilometre, though. He turns around and quickly walks inside: a little later we’re each handed two bottles of beer to quench the worst of our thirst. No, he doesn’t need any money for them. Apparently our smiling faces are sufficient. Of course we know that the French countryside has relatively few facilities to offer compared to the Netherlands. This still surprises us, though. So the motto is to replenish your supplies on time, when you’re in the larger towns. There you’ll often find several large supermarkets with a wide offering. Just like the number of facilities, the volume of the Maas is also getting smaller. We’re not really “cycling along the Maas” any longer. We still cross the river regularly, but the road rarely runs alongside the water. It can only mean one thing: the source won’t be that far away.

Water from the source
We almost ride past our destination. In a flash I recognize the monument from the picture that I’ve seen on the internet. The source is a little well with clear Maas water, located beneath the monument in honour of the river. A small public park surrounds this ‘holy’ spot. For the visitors a few nano gardens have been created, where you can pick your own vegetables or herbs. The Maas starts out as a single drop, a thousand kilometres away it’s a large river. We started out with a single pedal stroke and now we’re standing at the source. If you keep persisting, it will amount to something in the end. We don’t stick around for long. It’s already after eight and the air is pretty brisk. And apart from looking at the monument, there’s not much to do at the source anyway. Only later we realize that we’ve completely forgotten to leave the lamp at the monument. As an alternative we hang it in a tree in a forest, a few kilometres down the road. There it will probably still be swaying back and forth. Whoever finds it will receive a certificate. Honestly.